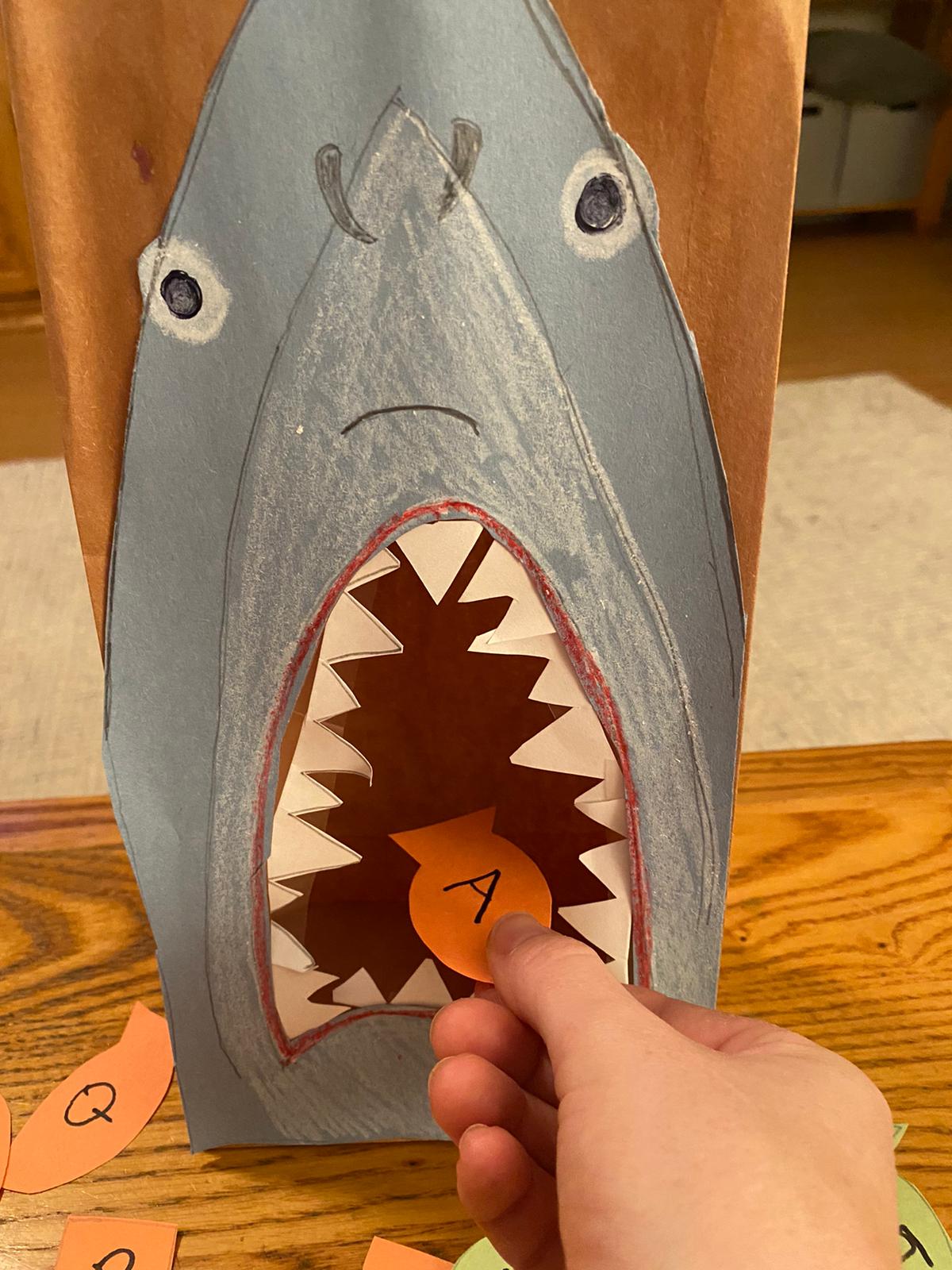 Dive into learning with this creative Feed the Shark activity! This activity is a great activity to complete with your pre-school and early school-age children and a bonus if your child loves sharks and the ocean! Feed the Shark activity supports the development of fine motor tasks such as tracing, drawing, colouring and cutting which are important for young children! You can also use this activity to practice letter/literacy awareness as well as numeracy skills by turning it into a game! Children can practice their alphabet, spelling their name and other words, as well as practicing simple addition. This Feed the Shark activity can also be used with older school-age children as they practice their hand-eye by aiming and tossing crumpled papers or ping pong

balls into the shark’s mouth!

First, place your paper bag on top of a chosen piece of coloured paper. A blueish colour of paper was chosen to make a Great White Shark, but you can pick any colour you would like. At this step, the bag should still be folded and flat. Using a pencil or crayon, trace the paper bag by drawing along the outside edges! Next,with your scissors, follow the line you have drawn, and cut out the shape of the paper bag. You should now have a paper bag size of coloured paper!

Now, draw the outline of the shark! Do this by drawing a triangle with curved lines. The curved lines will only go halfway down the paper and there will be no bottom line to your triangle!

Then, draw another curved triangle like the first one but on the inside of the outline of the shark’s body. This will make the shark’s pointed nose!

To make the mouth, draw one more curved like triangle inside the pointed nose! The first two curved triangles did not have a bottom line to connect the two sides. This time, you will draw a bottom line that will curve in towards the centre of the mouth.

**To make this step easier for younger children, they can draw the shark outline directly on the paper bag instead of tracing the paper bag** 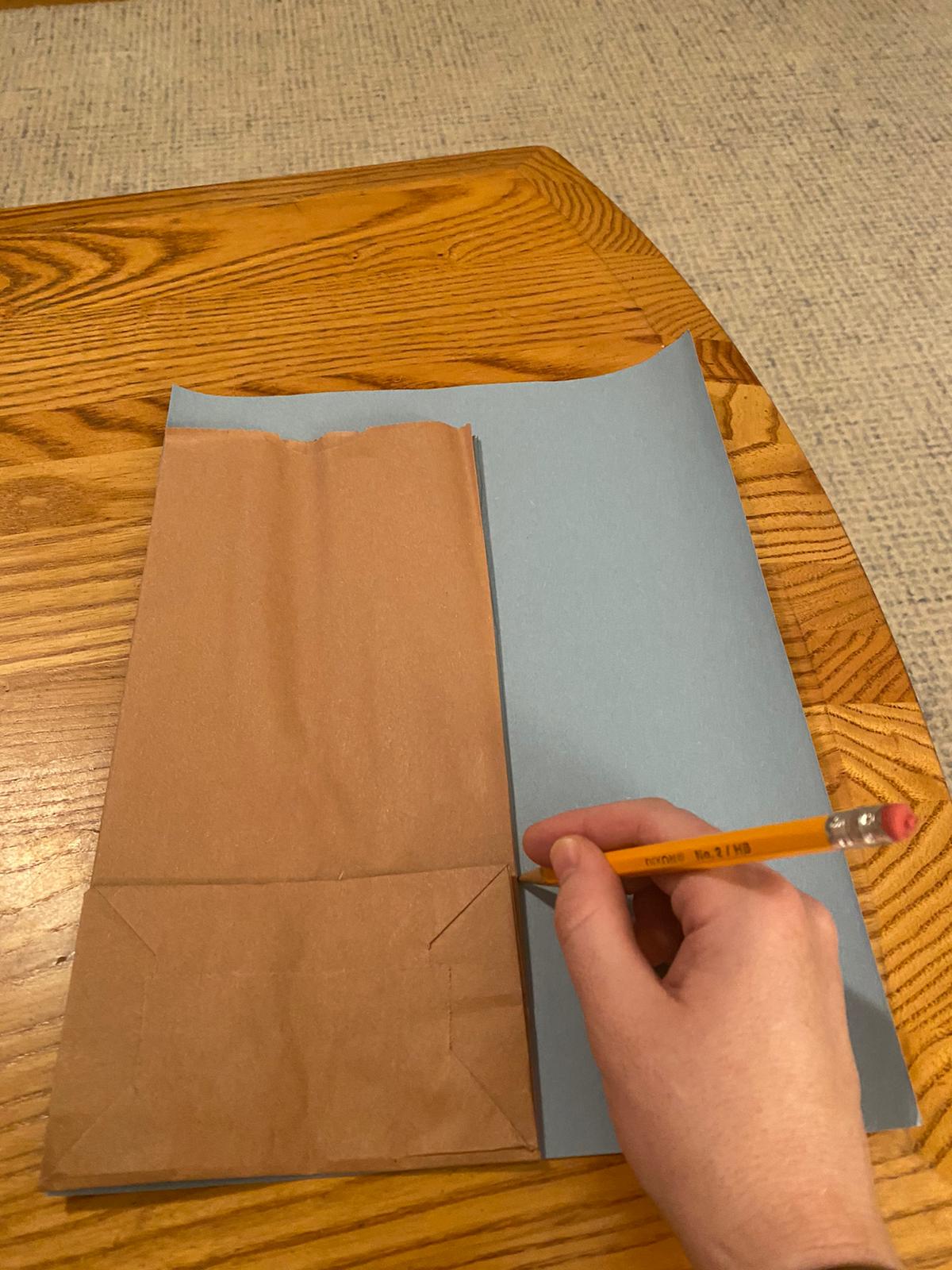 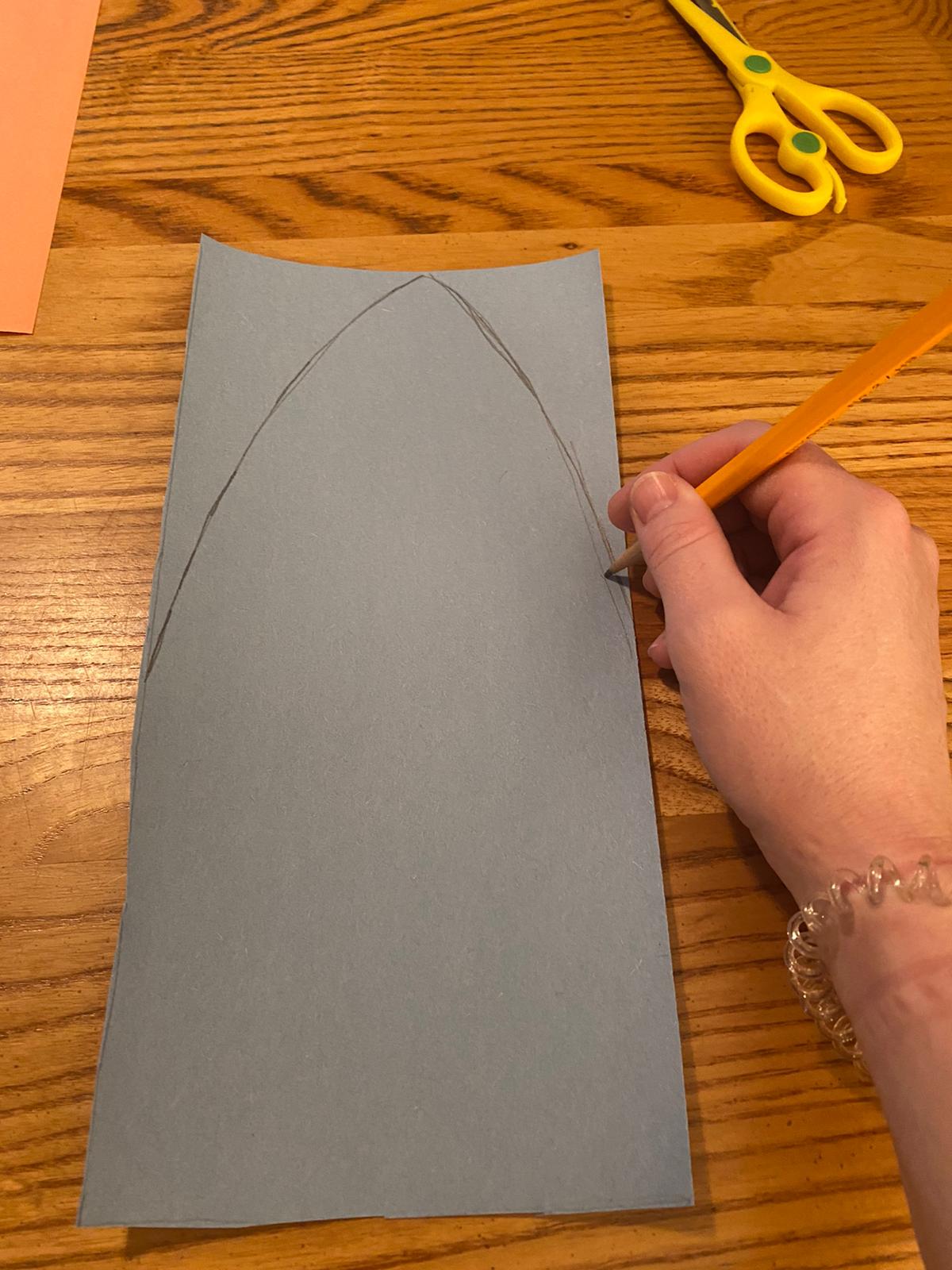 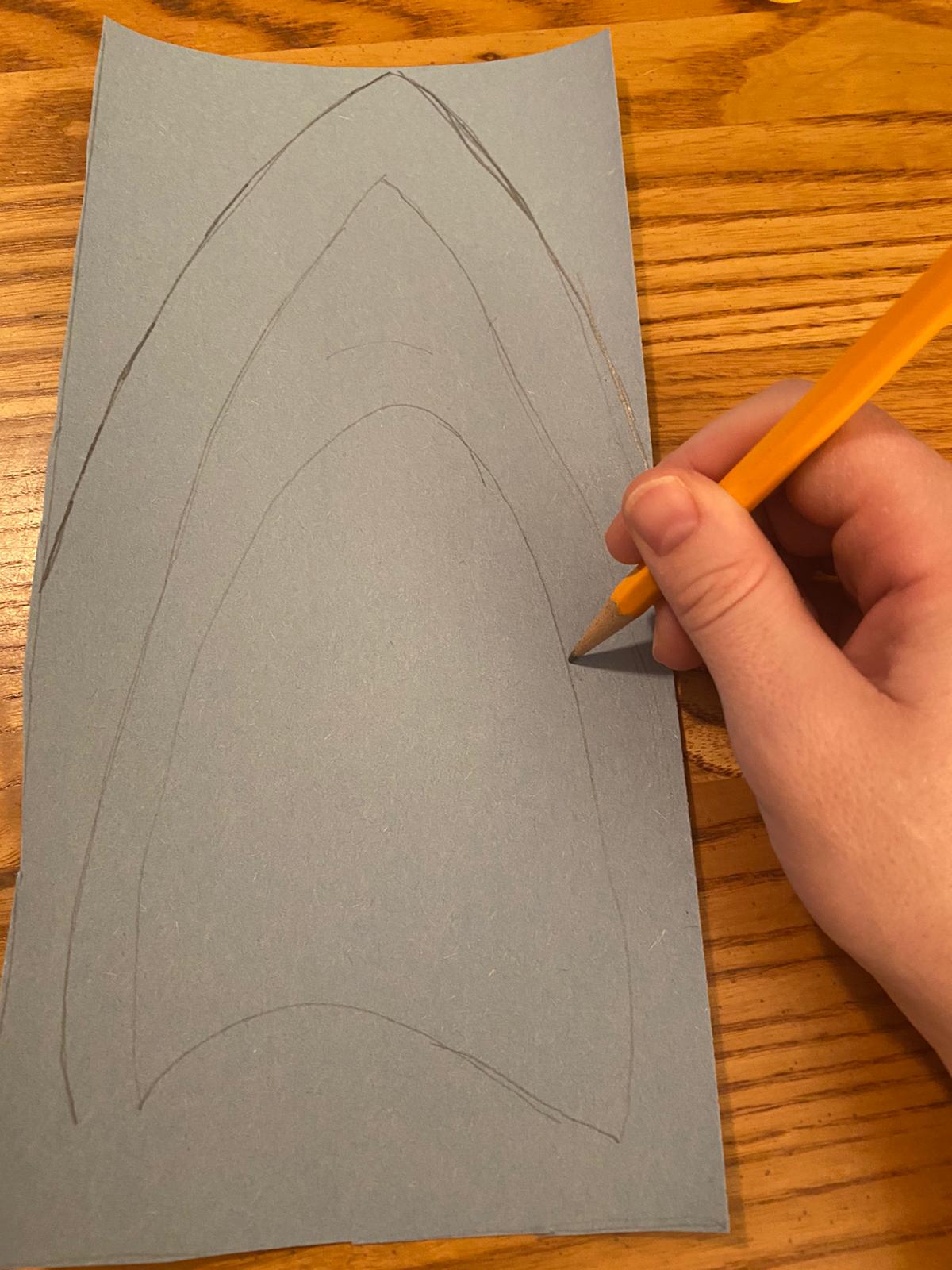 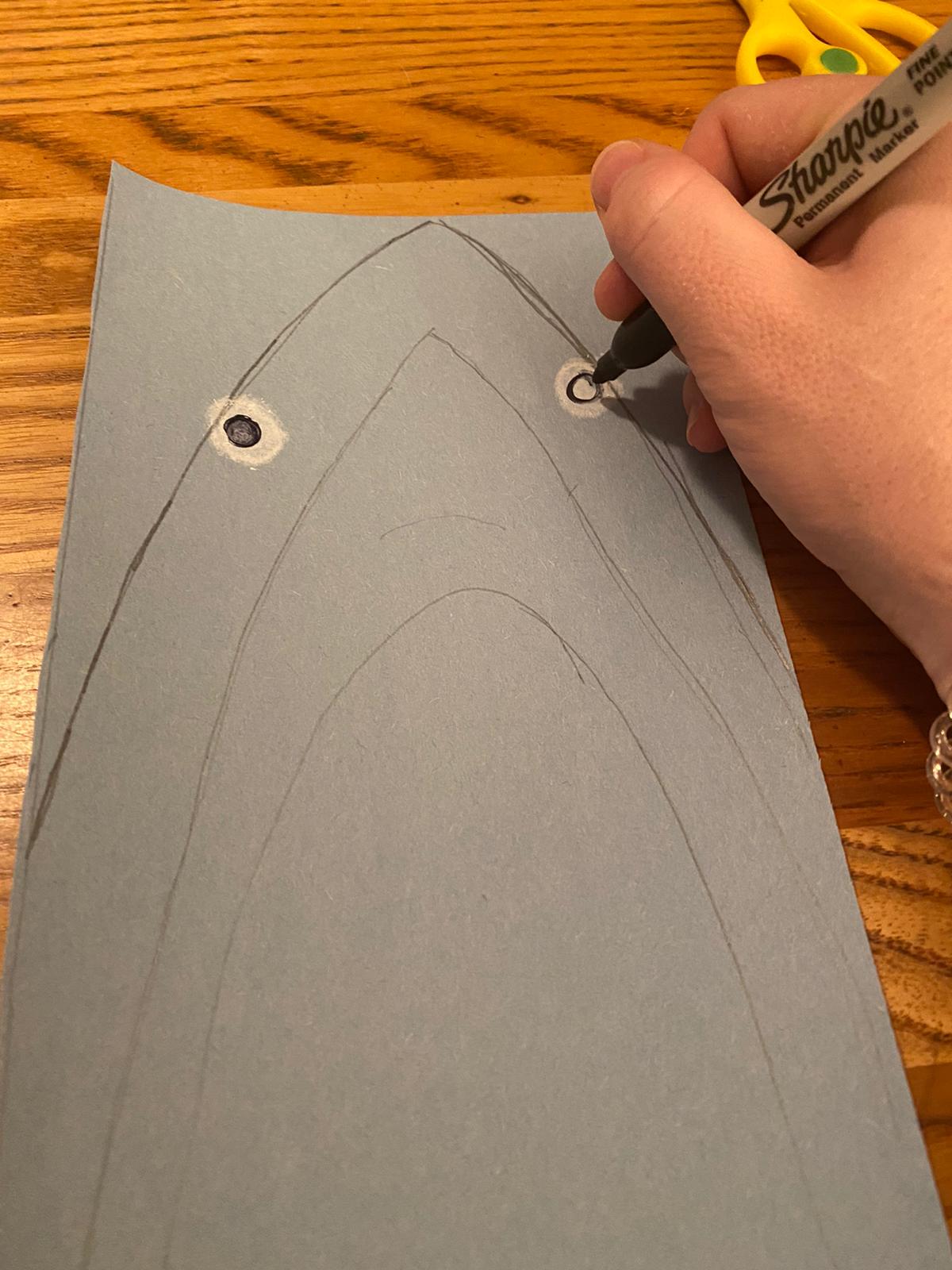 To draw the eyes of your shark, draw a circle using a white crayon or colour of choice on the outline of the shark’s body (the first curved triangle you drew), near the top point. Draw the other eye circle on the other side right across from the other eye. Colour them both in! Then, draw the eye pupils by making a smaller black circle in each of the white circles.

Next, draw the shark nostrils by drawing a letter ‘C’ shape and a backwards letter ‘C’ shape along the line of the shark’s nose (the second curved triangle you drew in step 1). Colour over top of it 2-3 times to make the shapes thicker! 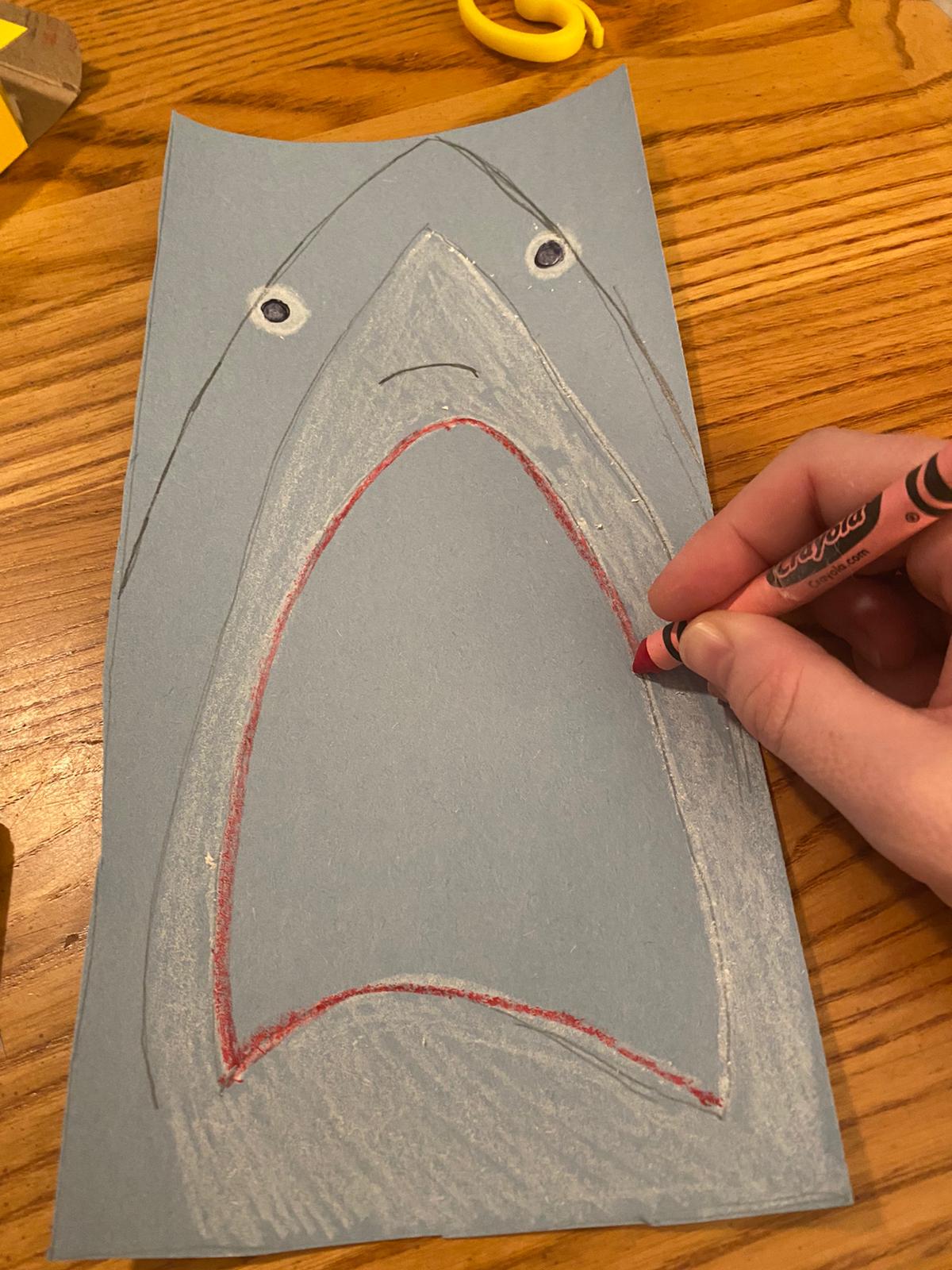 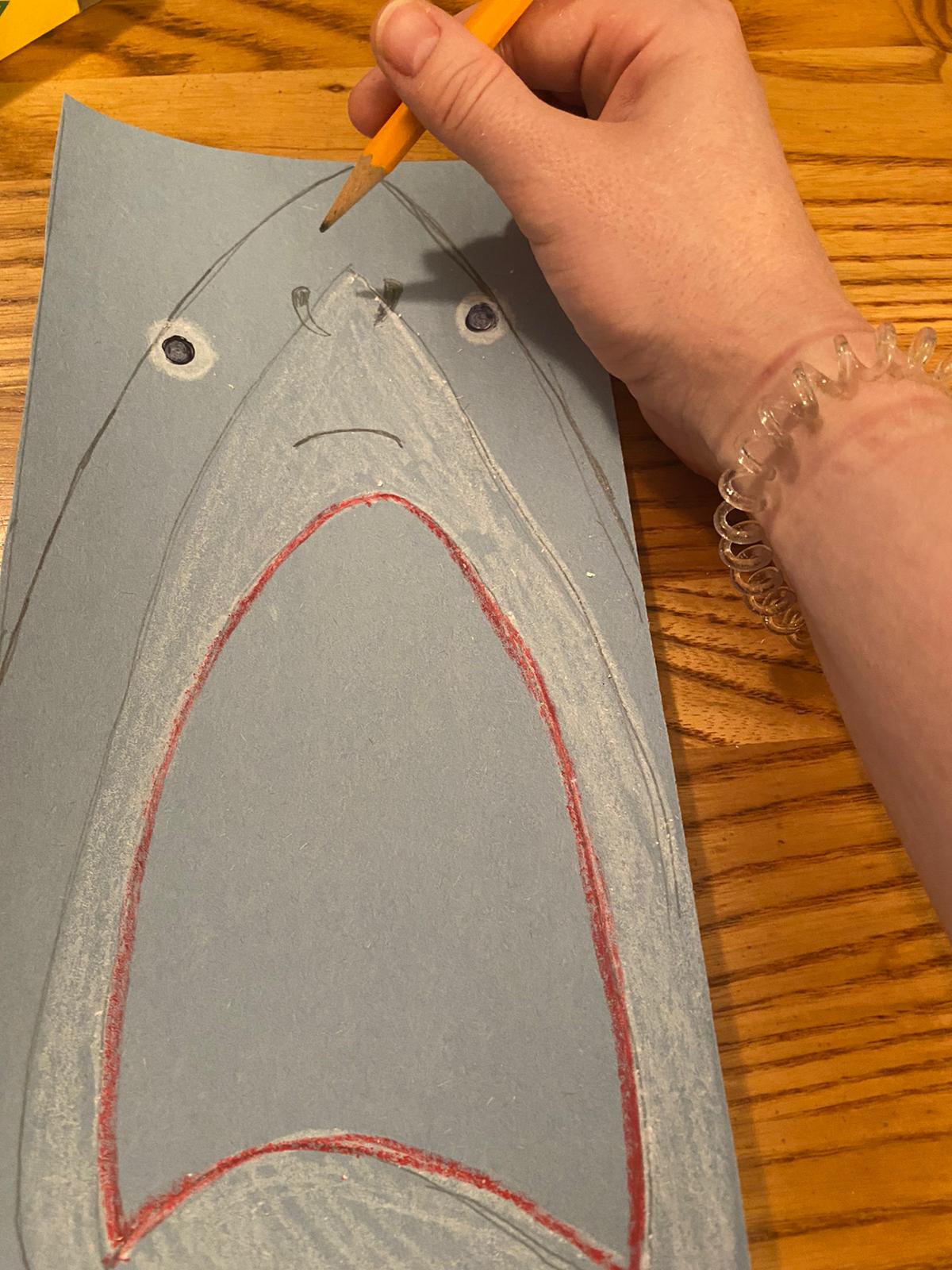 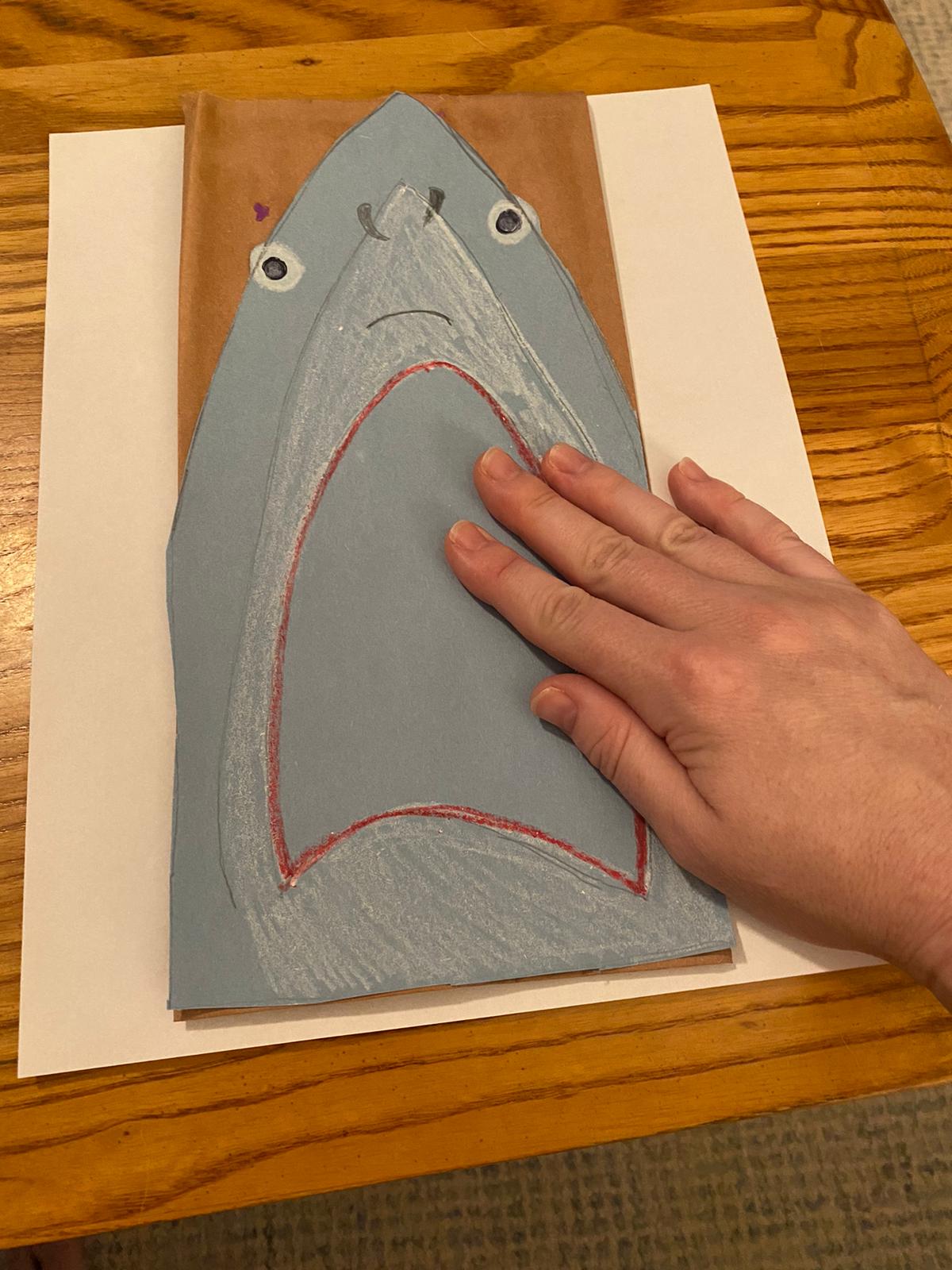 For this step, first, open up the bag so it is standing up straight! Do this by putting your hand in a fist shape inside the bag and opening your hand up at the bottom! Then, in the middle of the shark’s mouth, use your fingers to pinch the paper bag and make a cut with your scissors! This step may be tricky, so be sure to ask for an adult’s help! Keep cutting until you reach the outline of the shark’s mouth. Follow along the line, until that part of the bag falls out and there is now a hole in the mouth! Make sure you only cut one side of the bag! 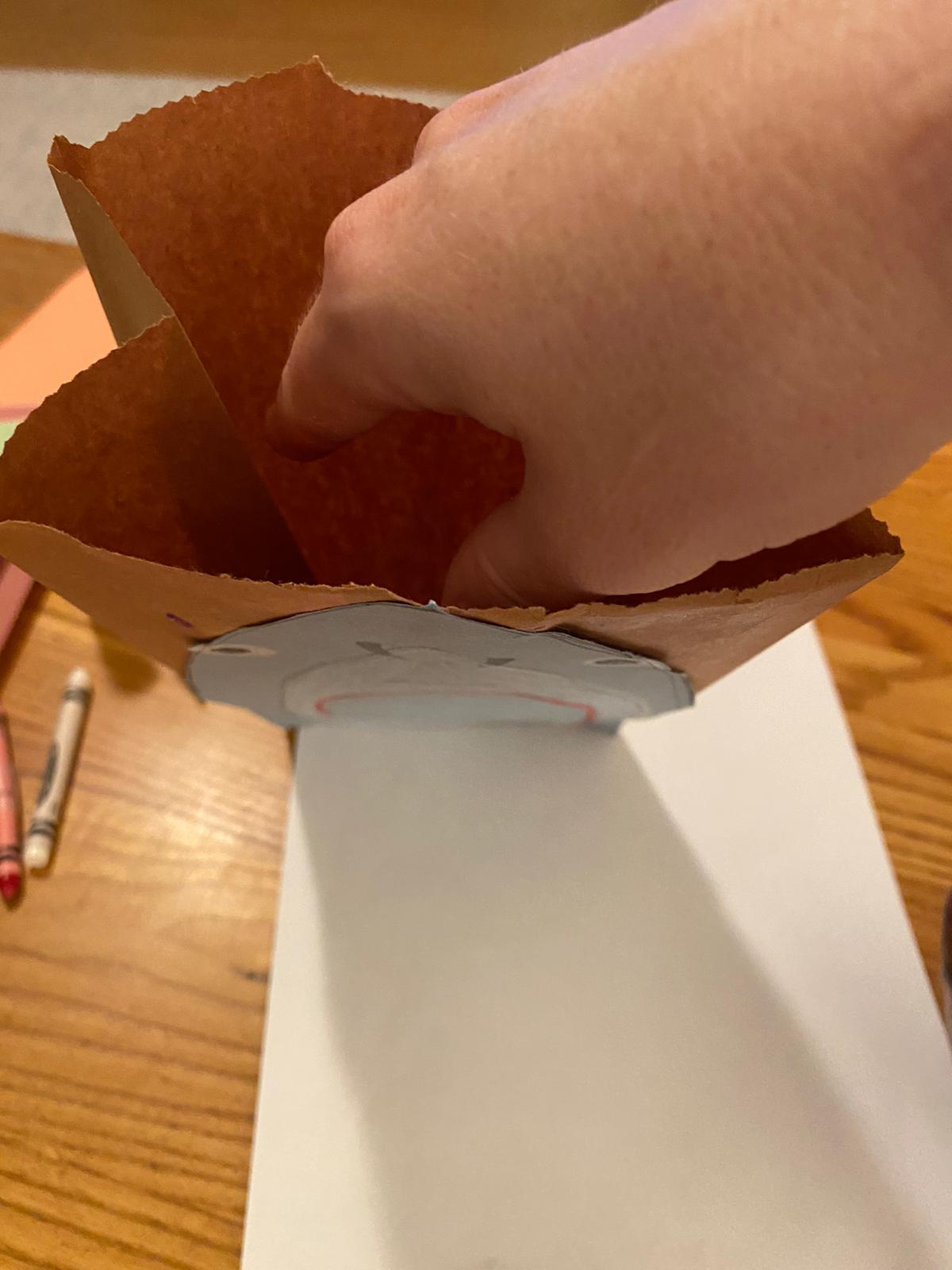 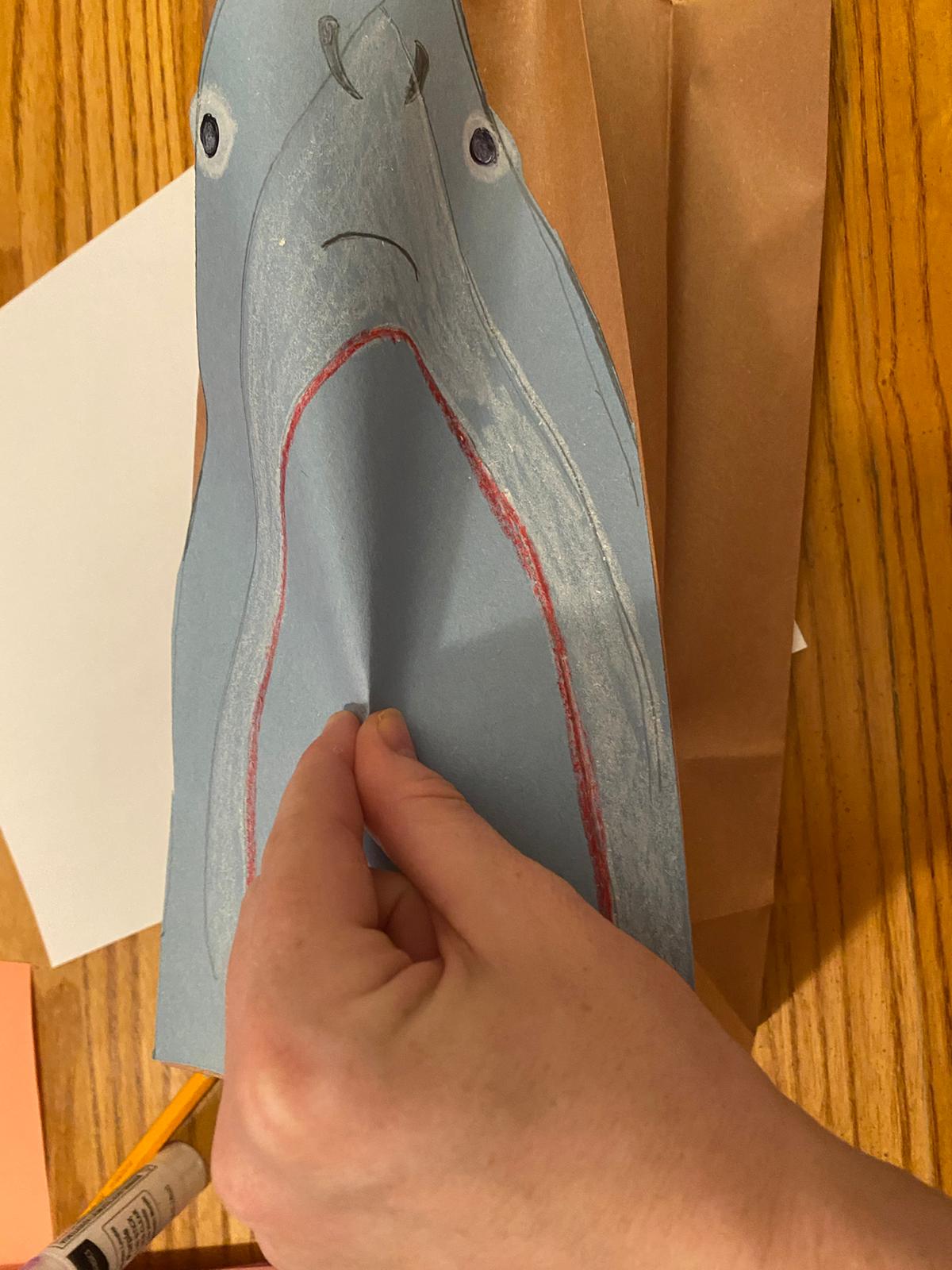 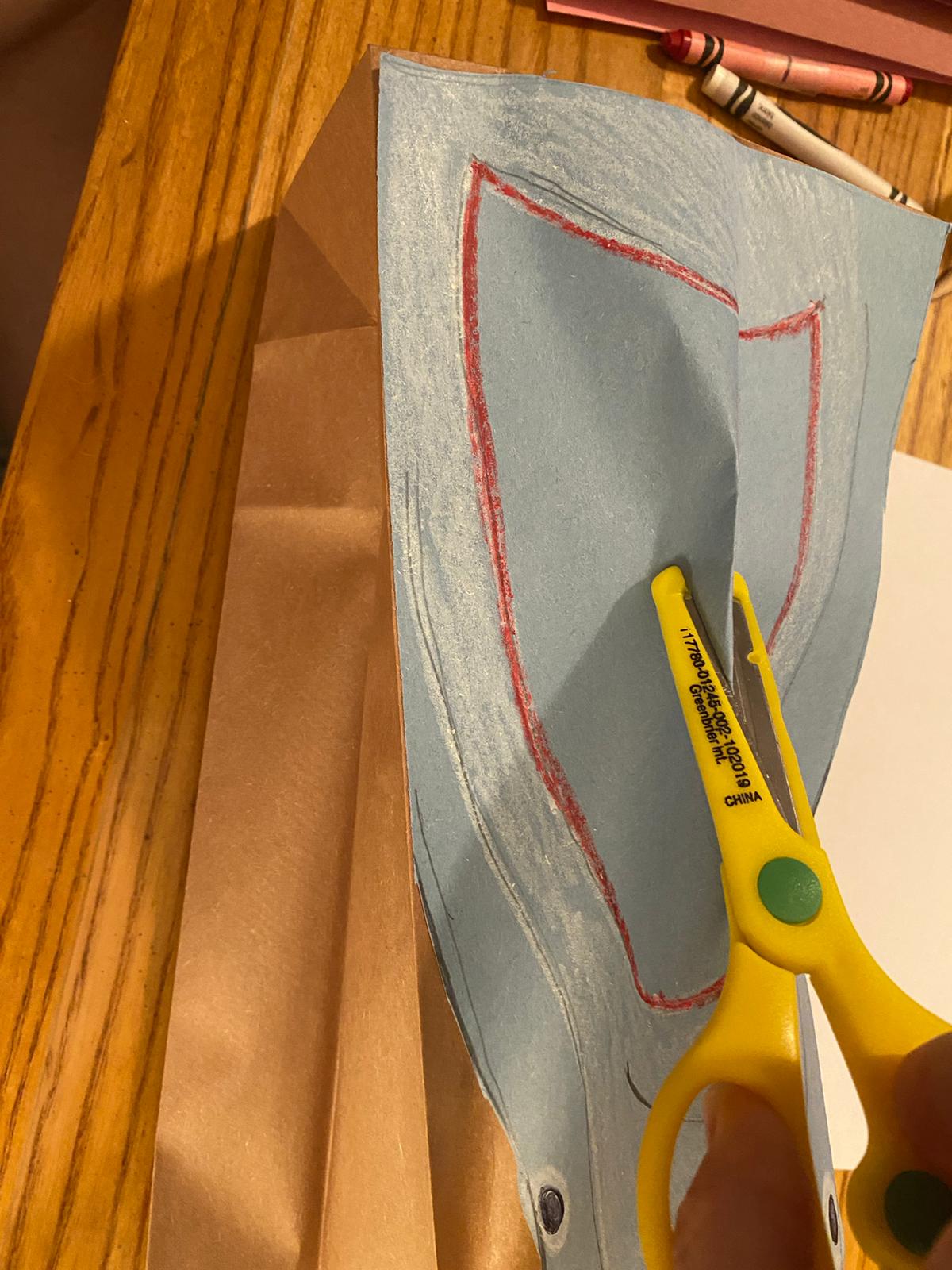 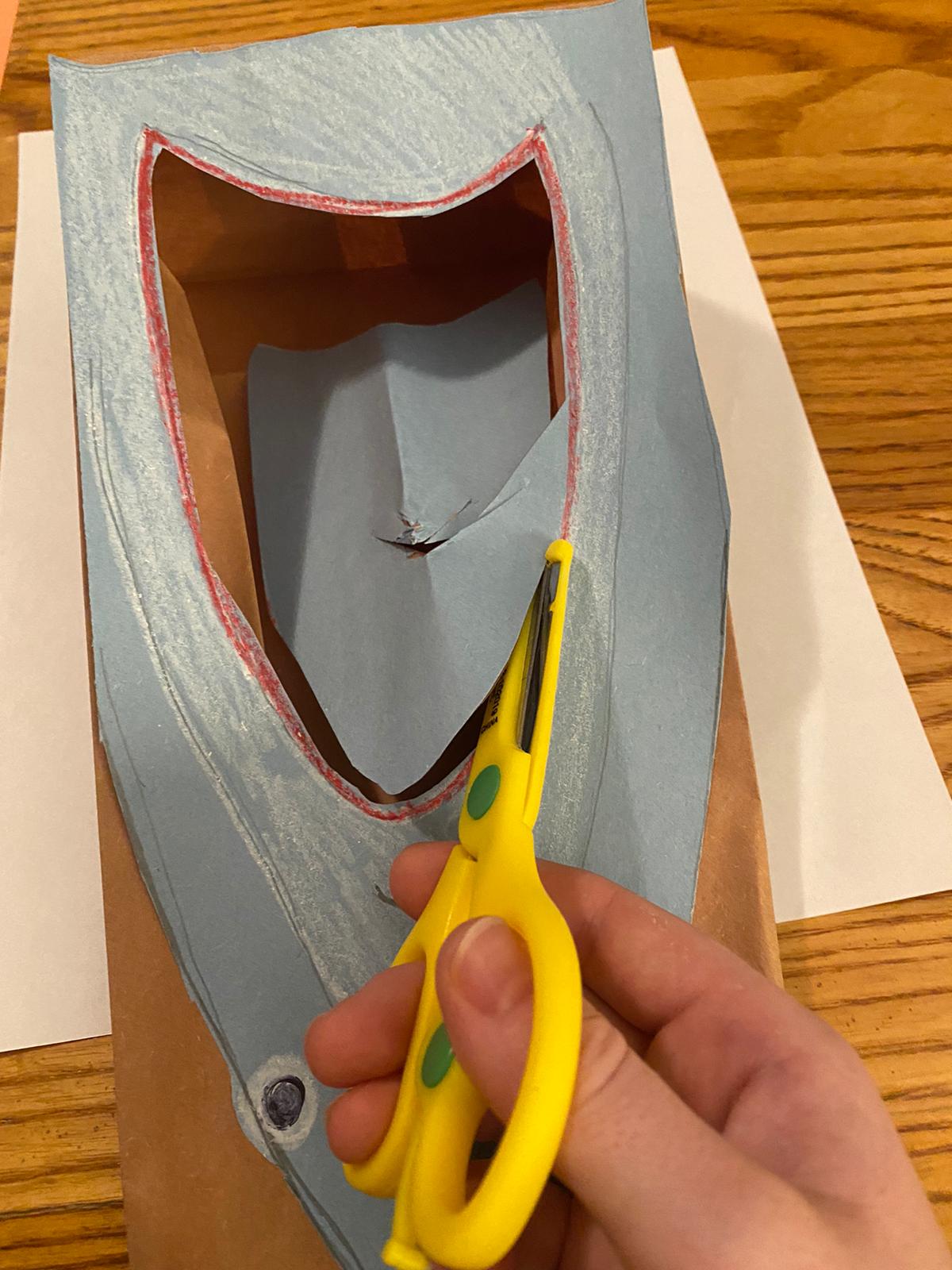 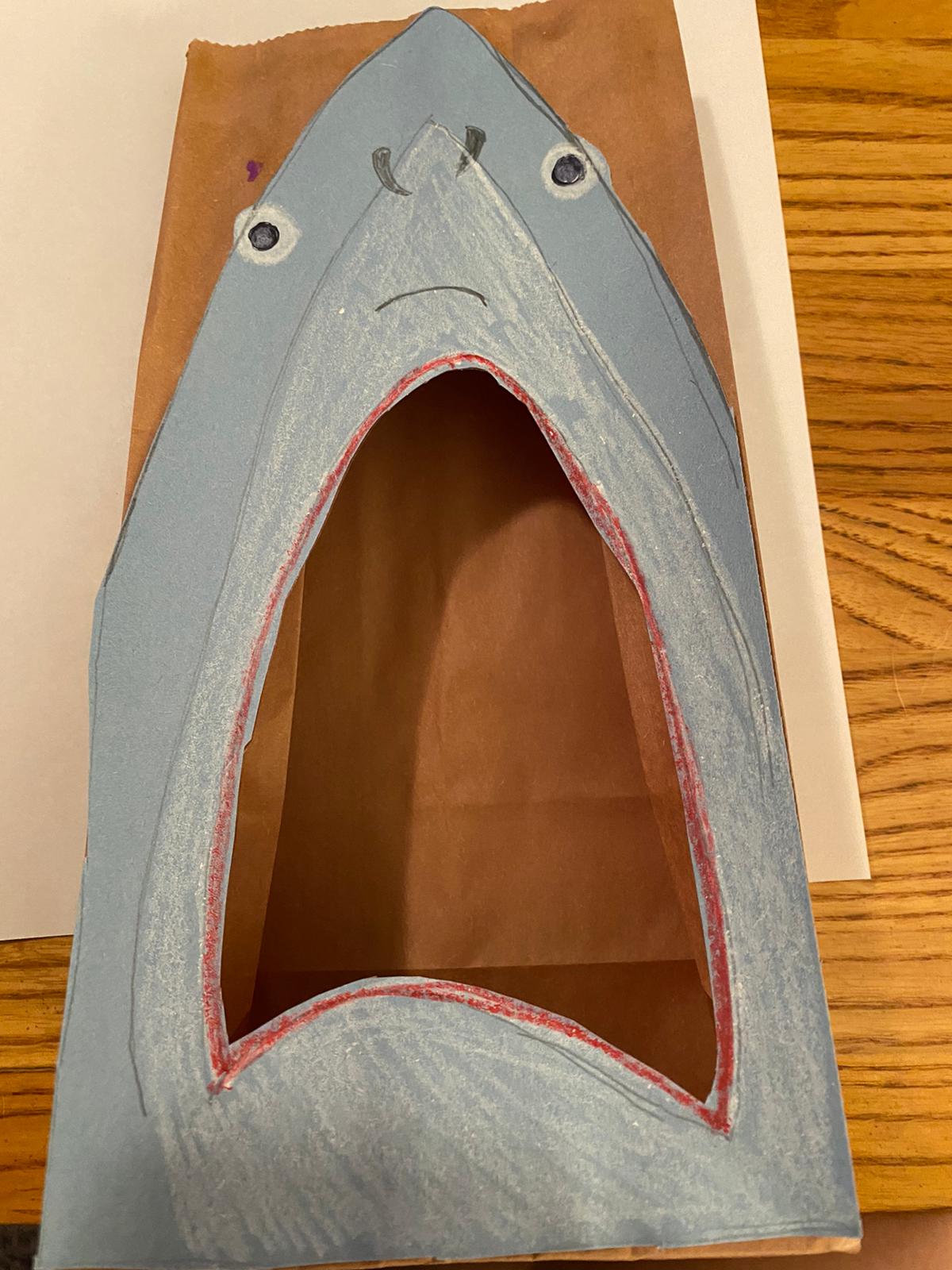 Now, on your white piece of paper, draw 10 or more teeth for your shark! Do this by drawing triangles, they can be the same size, different sizes, or a combination of both! Cut the teeth out. Next, tape the teeth around the inside of the shark’s mouth by placing a piece of tape to each tooth and pressing down firmly to make sure it sticks. You can tape it on the inside of the bag or the outside of the bag!

**A tip for this step is to fold the white paper in half and draw 5 different sizes of teeth. Then, when you cut them out, you will have 2 of each size which will equal to 10!** 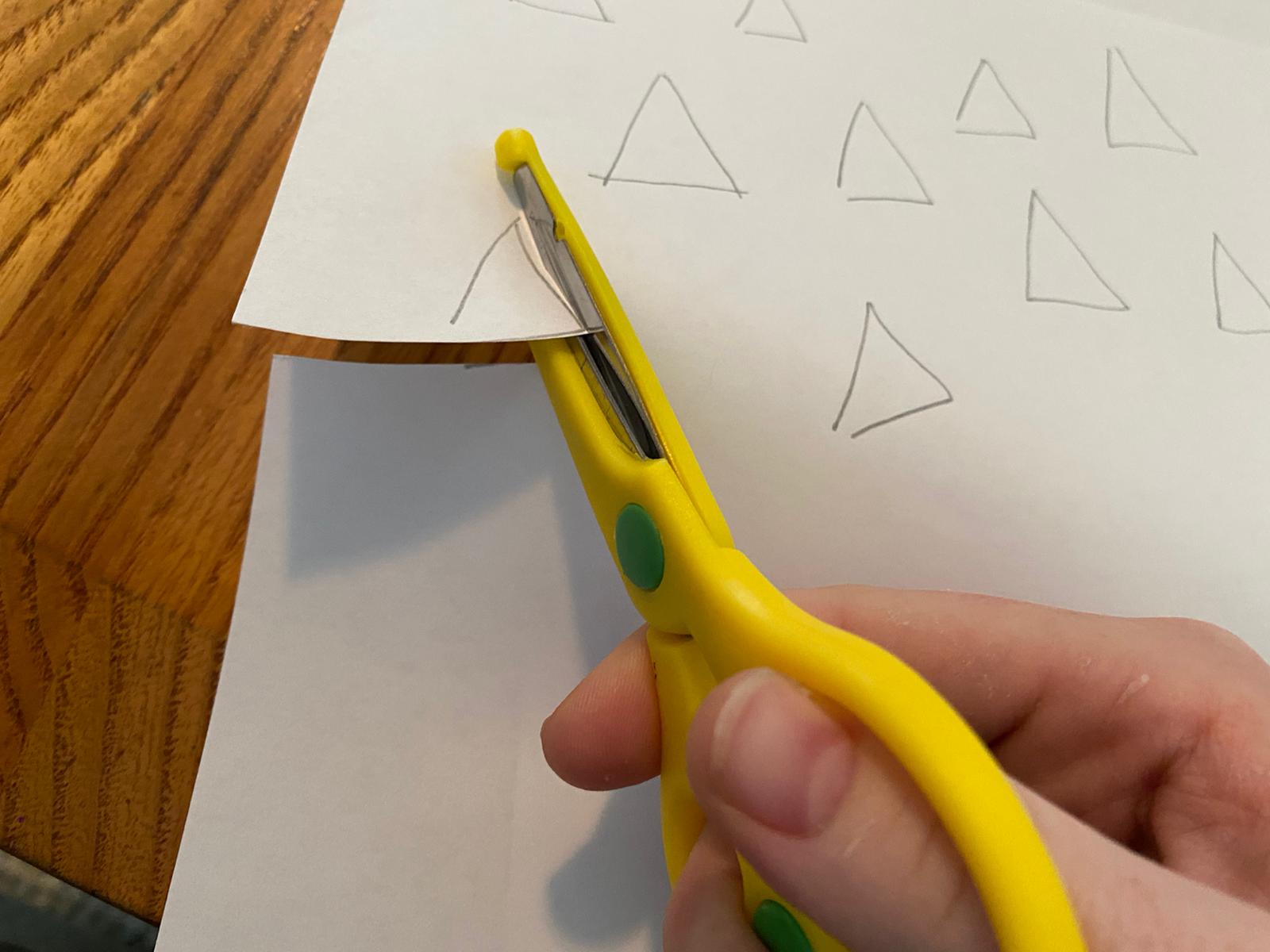 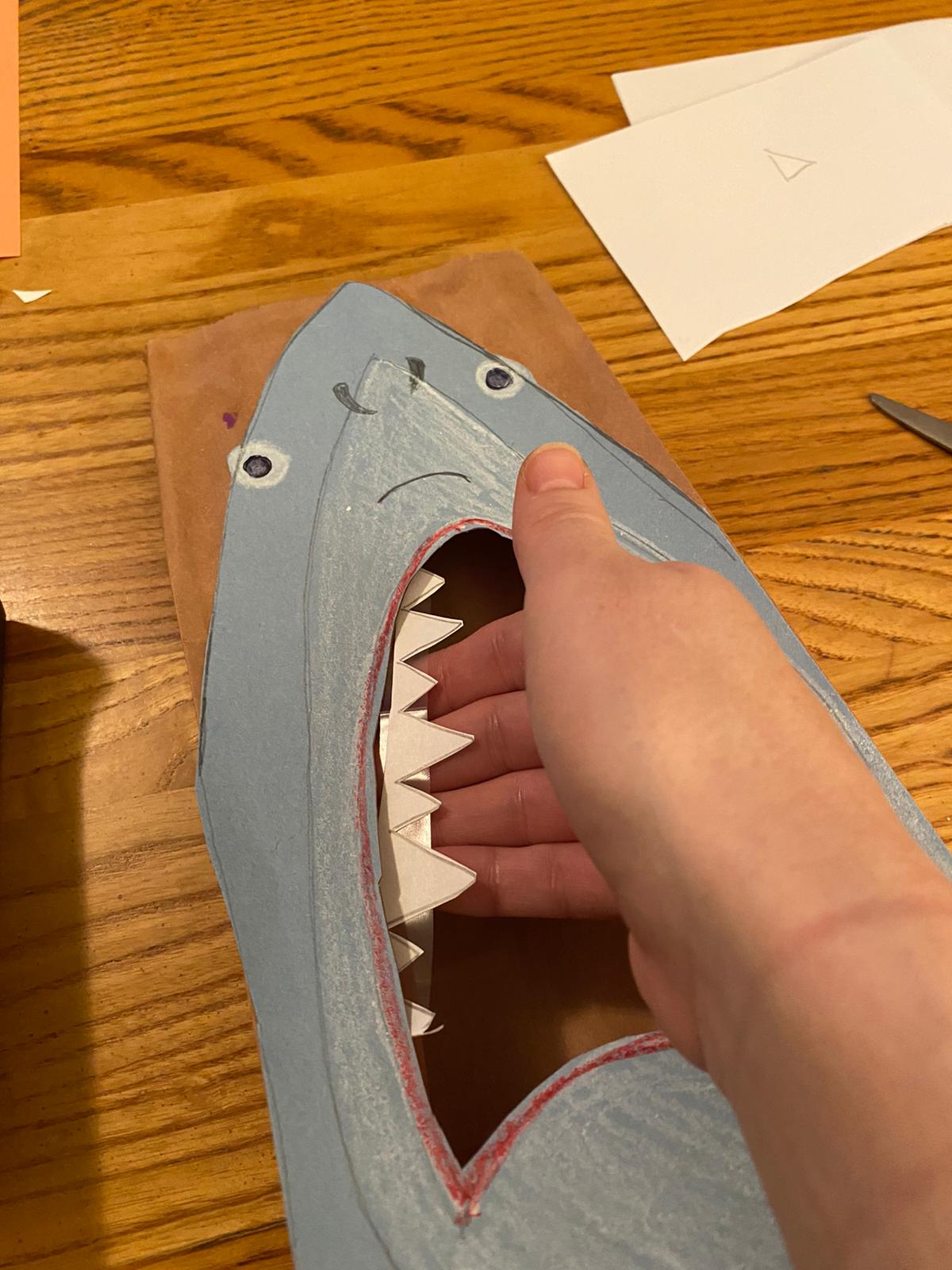 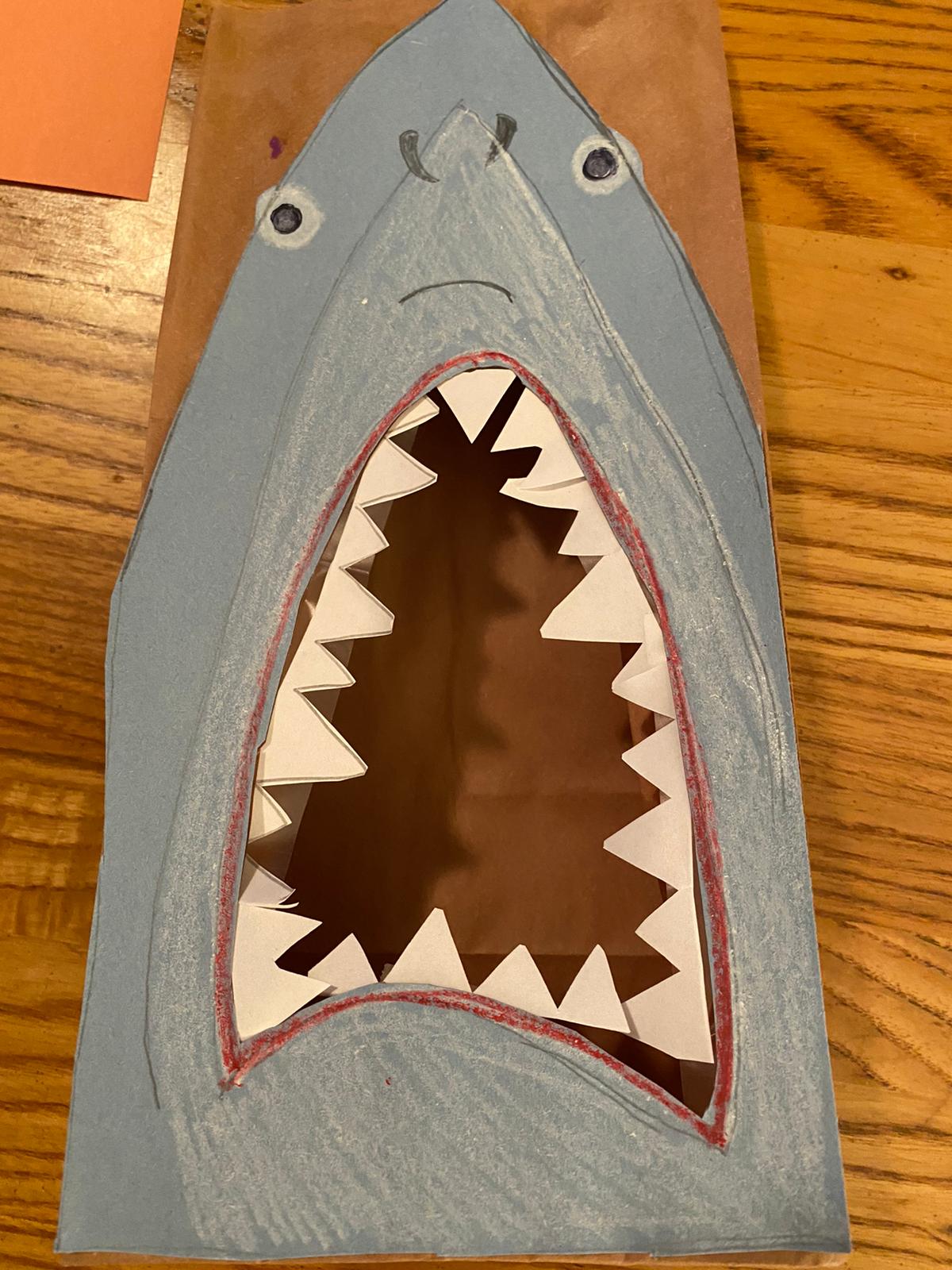 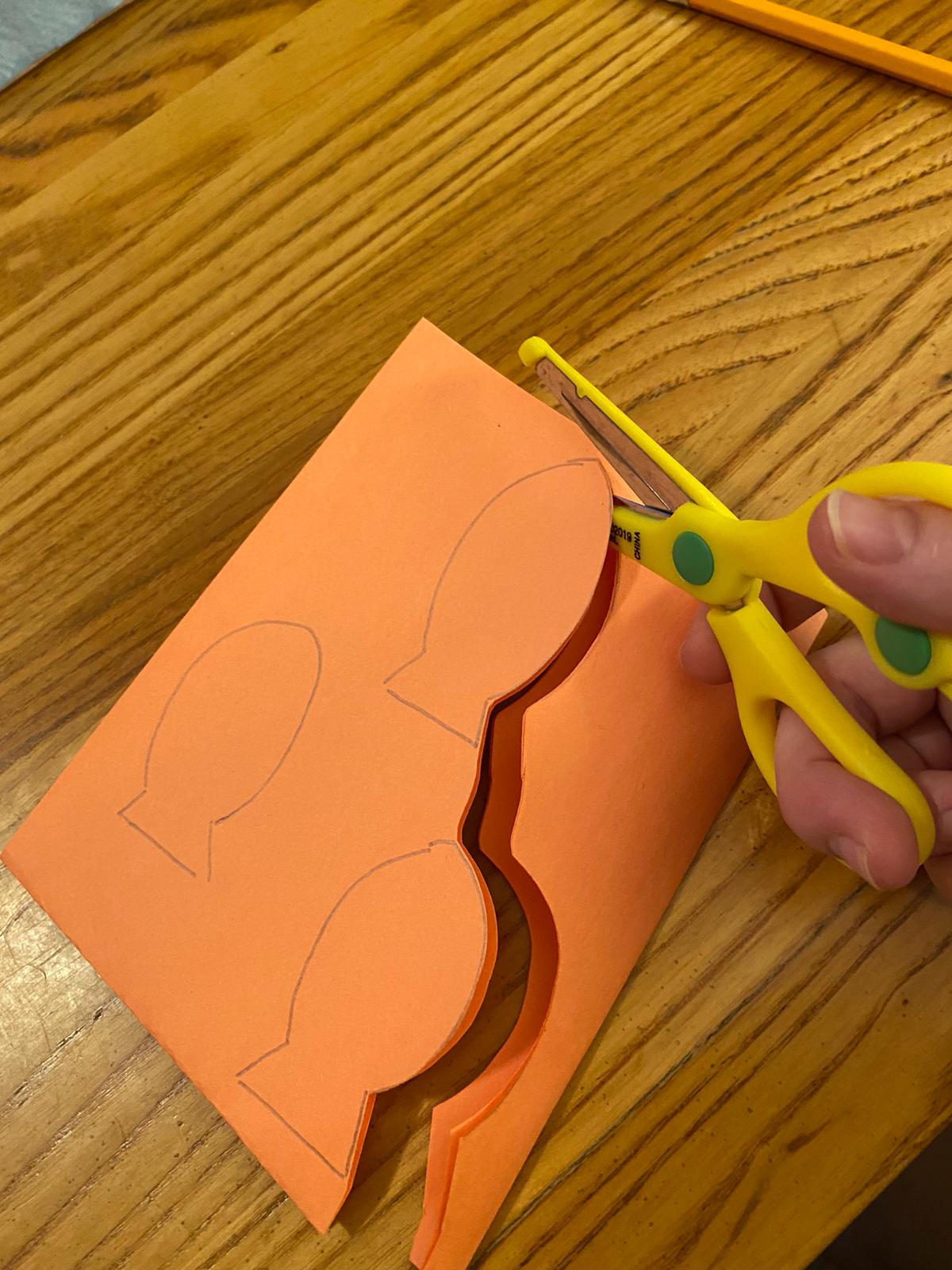 Now that your shark has some teeth - it’s time for it to eat some fish!! Grab your coloured paper to create fish! To draw the fish, start by drawing a long, curved triangle with no bottom! Then, at the end of each line, draw another short line sticking out away from the fish’s body. Draw a line between those two short lines to connect them. Using different colours, make at least 26 fish, one for each letter of the alphabet! If you are using this activity to practice spelling your name or other words, you may need more than one of certain letters! Then, cut out all the fish! Similar to creating the teeth in the previous step, fold the paper in half so when you cut the fish out, you have fish!

**You can also draw and cut out different shapes, such as triangles, circles, or squares**

After you have cut out all the fish.shapes, write in the middle of the fish letters or numbers that you want to use for this game. 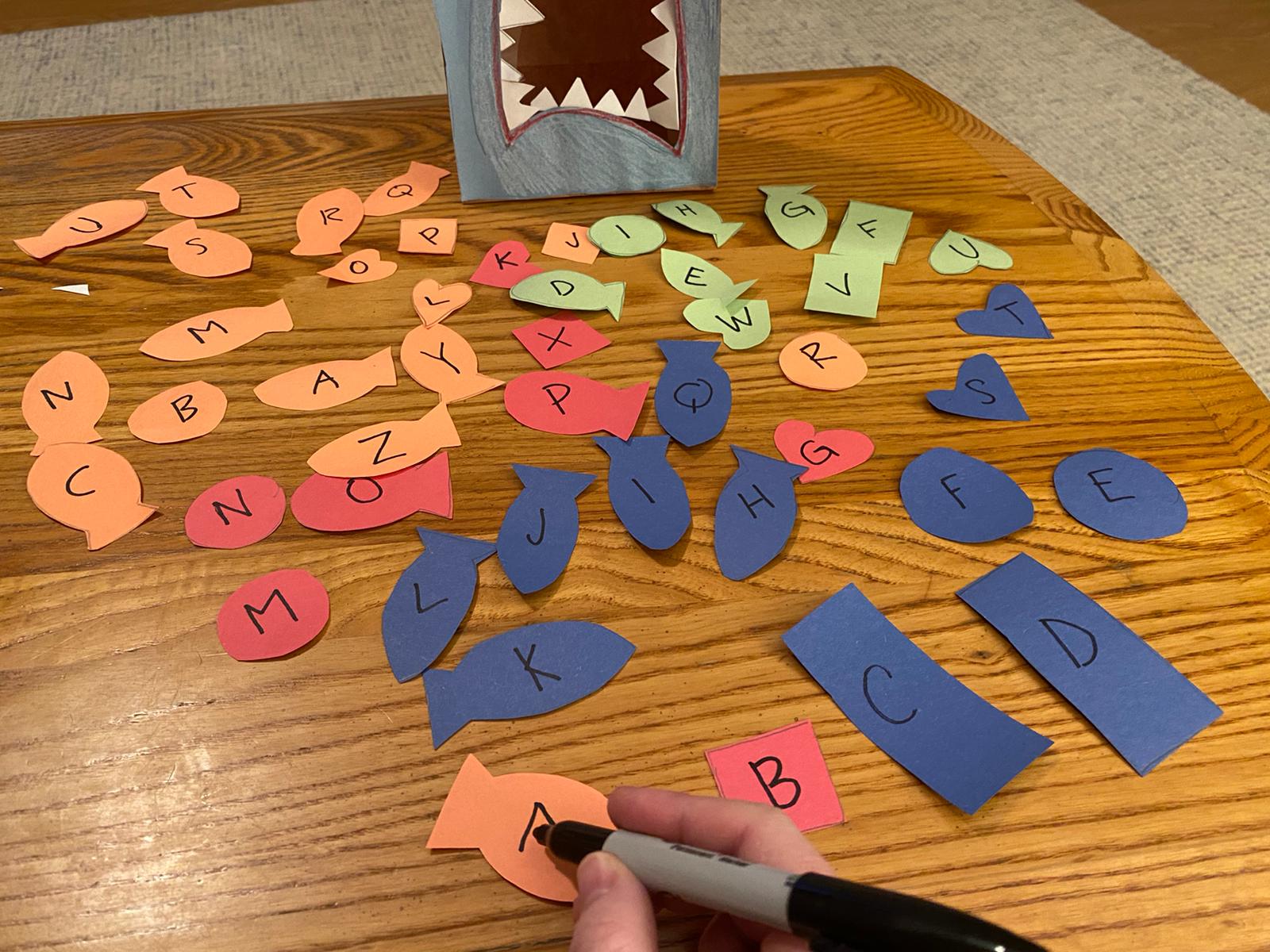 ❖ You can also play a ball toss game with the shark by balling up a piece of paper or using a ping pong ball and throw it through the shark’s mouth! Start close and move further and further away.

❖ To practice numeracy skills, ask your child different basic addition questions such as 1+3 and they could feed the shark 1 fish and 3 fish, and then count them up! 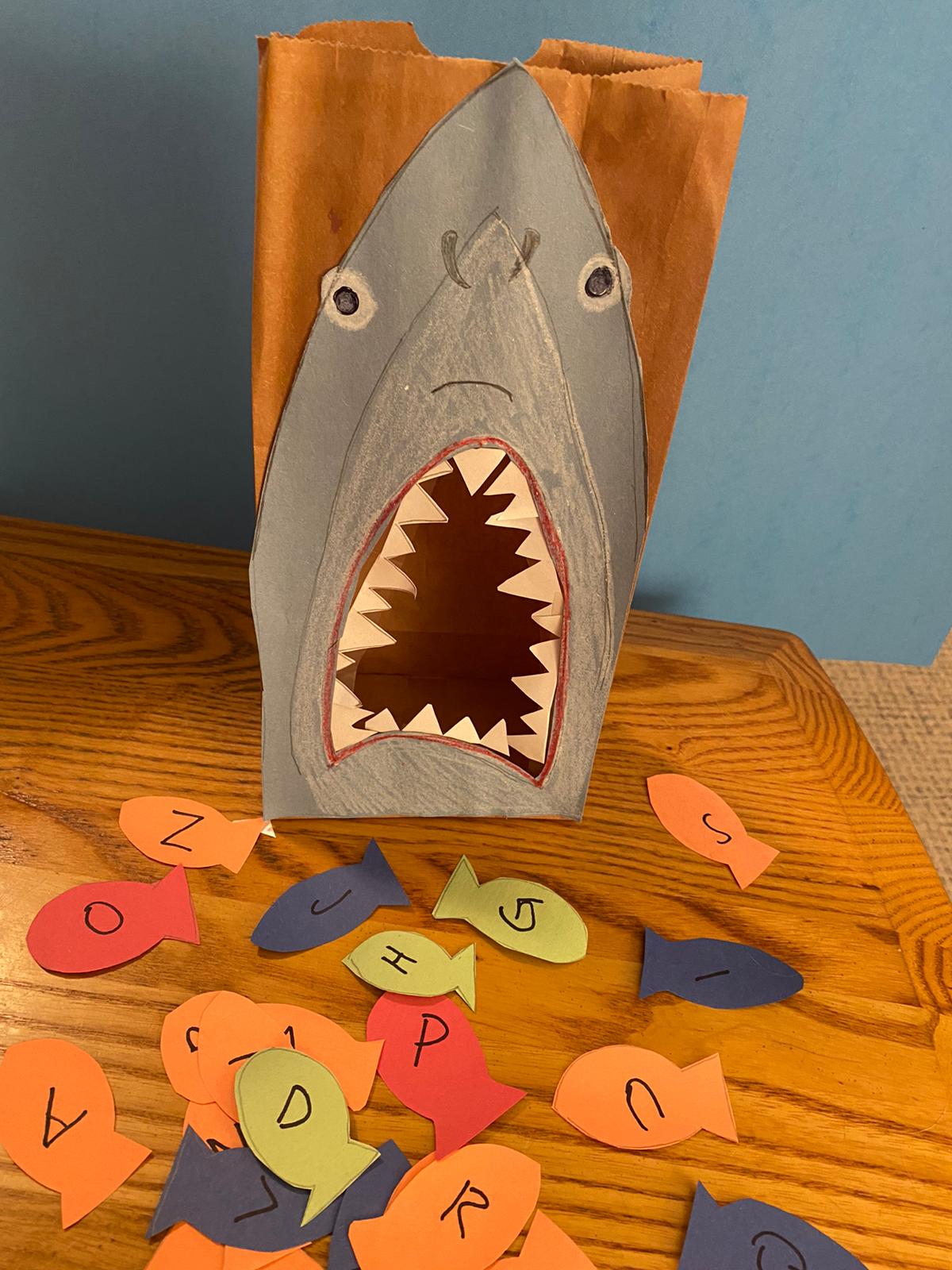