This is a great activity for your children in the pre-school and school age range. Creating a Balloon Pig will engage your child’s imagination and creativity skills as they turn a balloon into a pig with just a few materials that are probably already in your house! Pre-schoolers may need some more assistance as blowing up a balloon can be difficult for small children. Drawing, colouring and cutting are all tasks that will help in prompt fine motor skills in young children. Engage your child by asking them what they know about pigs - “Where do pigs live?”, “What do they eat?”. Balloon Pigs can be an awesome decoration addition at your next animal themed party!

One pack of balloons

Markers or crayons (either works great!)

Sharpie ** Ask an adult for this

First, blow up a balloon! We recommend pink for pigs, but you can pick whichever colour you want! Stretch out the balloon a little bit by pulling on each end and creating space between the ends! Blow up your balloon to your desired size and tie the balloon securely! This step can be kind of tricky so if you need to, ask an adult!

**Be sure to clean up the balloons when you are done with this step, it is unsafe to leave them around in case pets or younger siblings put them in their mouths!**

Next, draw a circle on a piece of paper for the pig’s nose. You can make it as big or small as you would like! Then, with a marker or crayon, colour in the circle with a similar colour to the balloon you picked! For example, if you picked pink for your balloon, use a slightly darker pink. Coloured paper will also work well for this step too!

Once you’ve coloured in your nose, draw and colour in two little ovals near the middle of the nose! These are the pig’s nostrils! Cut out the nose and set to the side.

Now, on another piece of paper, draw the pig’s ears! To do this, you can think about drawing a triangle with long curved sides! Draw two.

Next colour in the ears, or, if you used coloured construction paper you can skip that step. Cut out the ears, but leave a little bit of extra space at the bottom of the ear. This will help the ears to stand up on the head later! 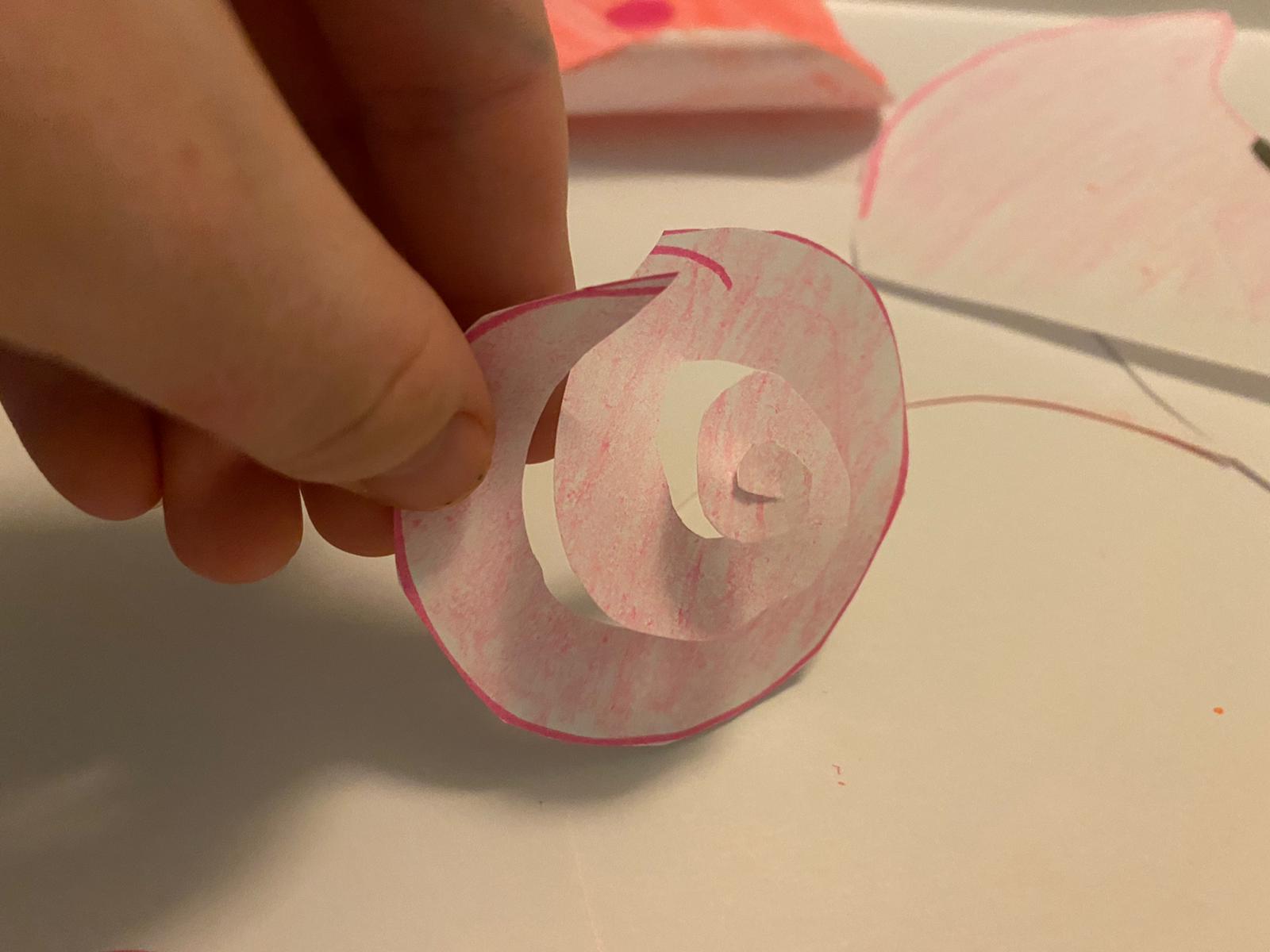 Next, draw another circle! Colour it in with the same colour as your nose, and then cut it out. To create a curly tail, start by making a small cut into the circle. Carefully cut along the inside of the circle while turning it to make smaller circles without cutting all the way through. Again, you may need to ask for an adult’s help, that is okay! It should look like a swirl when you are done! 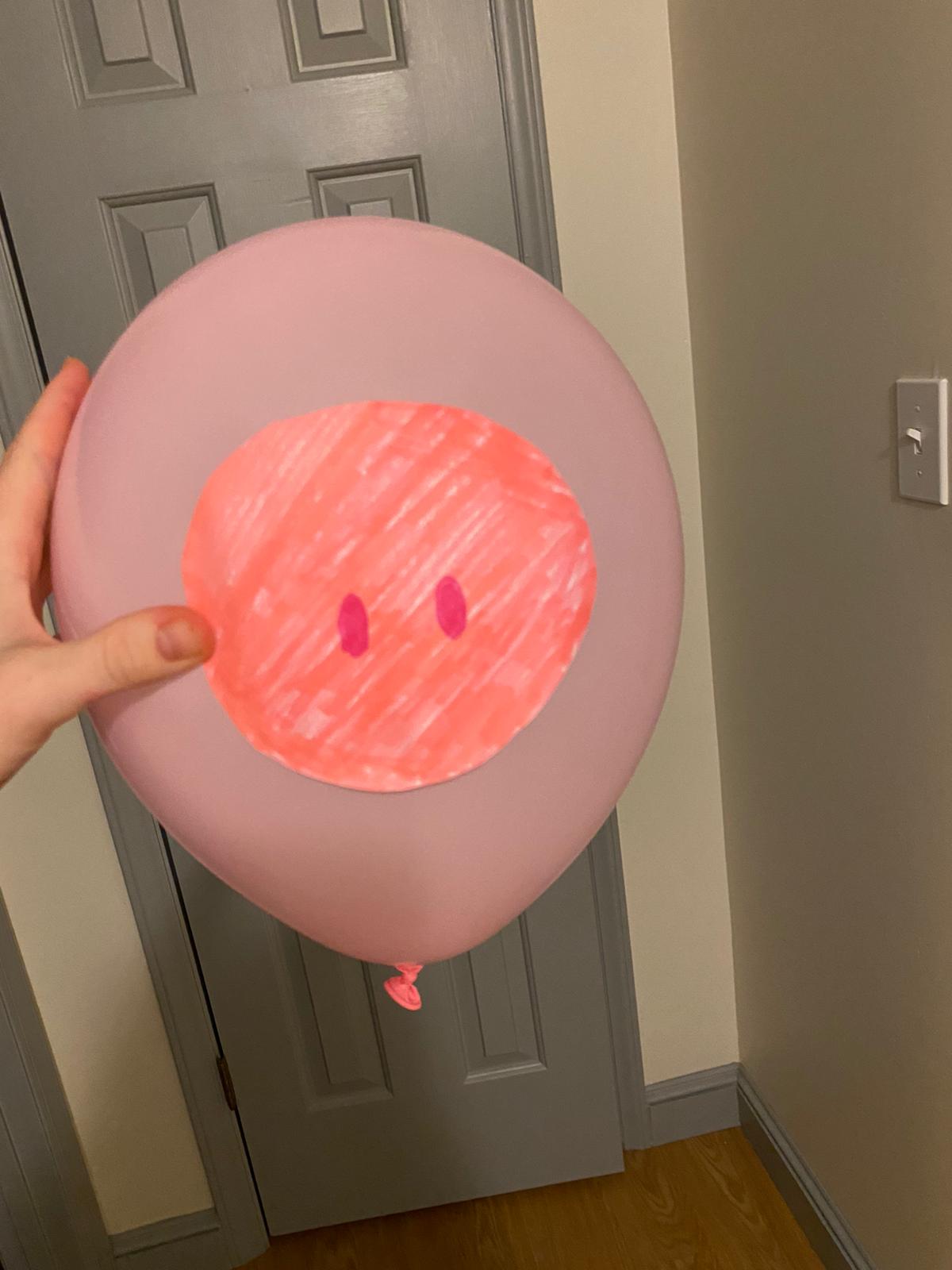 Finally, pick a side of the balloon to be the face and tape the nose on! Next, take the ears and fold the extra space below the ear so it helps the ear stand up! Tape it on top of the balloon at the side where the ears would go. Next take the end of the tail and tape it to the back of your pig

Last but not least, with a sharpie (if you do not have one, drawing eyes and taping them on works well too!) draw two ovals for eyes. This step is like what you did for the pig’s nostrils! 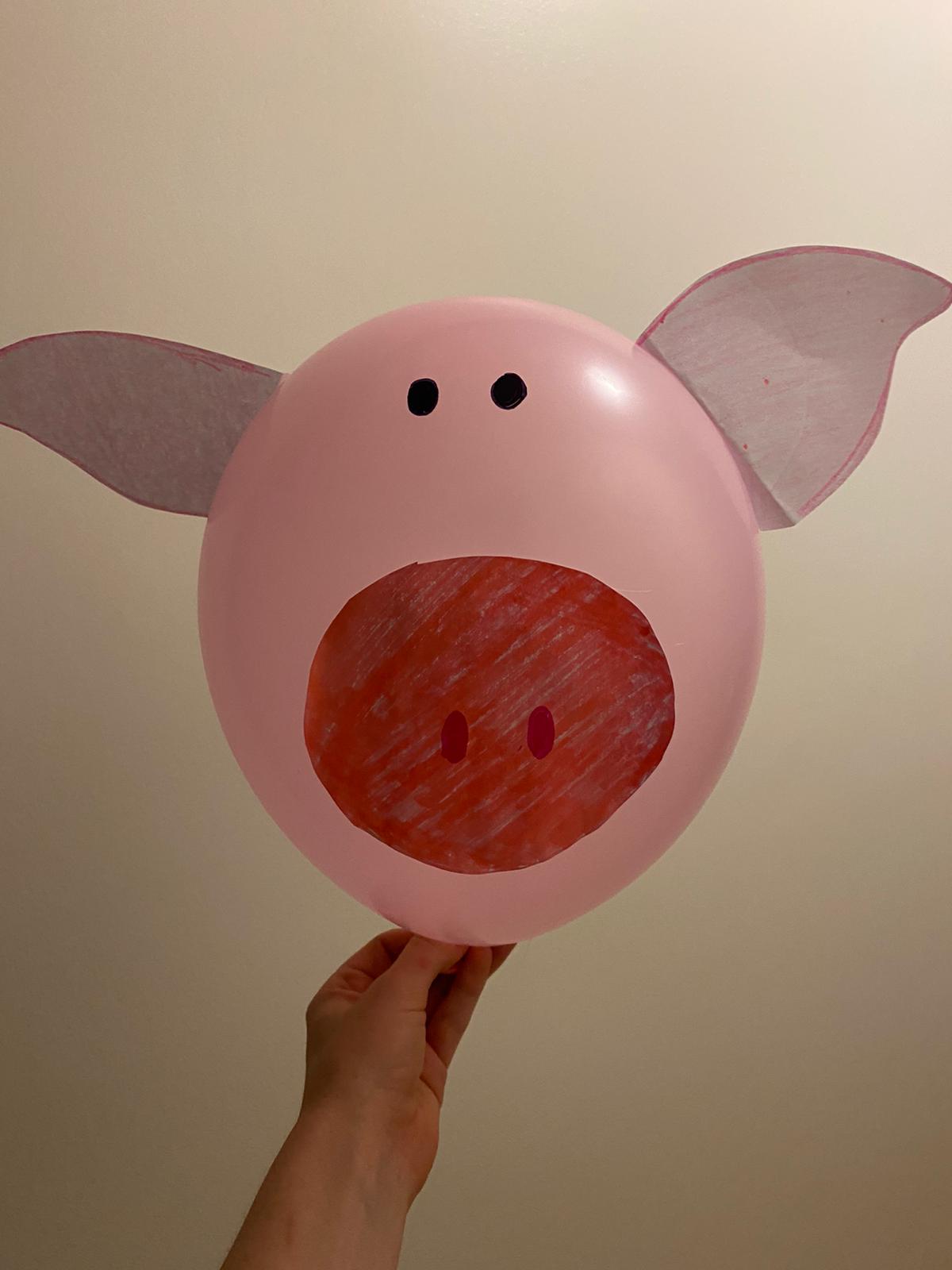 What other kind of animals can you make with a balloon?!